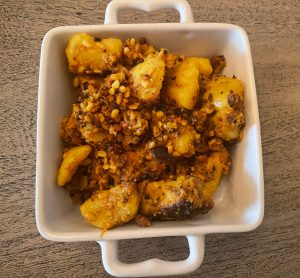 I have never been a big potato fan…I still think it is a blah individual, but a generous one. By that I mean that while it does not have much to offer just by itself (I know I run the risk of being set on flames!!), it boosts the taste quotient of the others that it stands with. In that sense, it is but a humble potato! (stealing this line from a niece :-)) Also, it takes on the flavor of whatever you add to it, so in that case, it is a cook’s delight.

One such thing is this roasted potato side that is common in some Tamilian households. In this version, I went ahead and used a generous hand with the chili powder and let the potatoes rip in the pan and get dark and really crisp. Generally, folks would not go that far, but I do :-). And after you make this, I have some special notes to the chef:
Switch off the stove.
Ensure you are alone in the kitchen.
Stand in front of the wok and inhale the aromas emanating from the pan!
Take a fork and poke into one of the chunks, blow on it and pop it into your mouth!! Close your eyes and wait for the crunch!!! Pure and total bliss!
Repeat or resist (if you can and let me know!)

I would say this is comes second to the crowd-favorite: Podi Urulakizhangu (basically diced spiced potatoes) which remind me of hash browns that I have seen in breakfast buffets in many hotels, but FAAAAAAR less appetizing! Before you want to sling something at me, made these two beauties and then talk to me!!

Anyway, these blackened potatoes were a welcome addition to my plate full of typical Tamilian goodies: Parangi Pitla, Blackened Potatoes, Podalanga Pachdi, Peerkanga thogayal, and a fresh carrots, mango, roasted chana salad. And oh…how can I forget the crunch from the mixture??!! Thanks to the local Flushing Ganesh temple that churns out these goodies for bhukkads like us! 🙂

Cook and see I say! 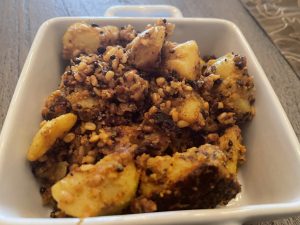 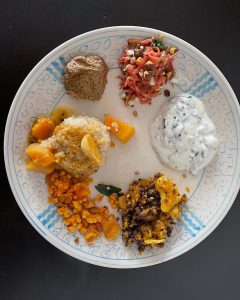 Note:
* Potatoes should not be overcooked. If they do, you may want to switch to Plan B and make potato cutlets!! Because this dish requires that you have potato chunks!
* As mentioned, this is my spicy version. Feel free to tone it down as you desire.

This site uses Akismet to reduce spam. Learn how your comment data is processed.